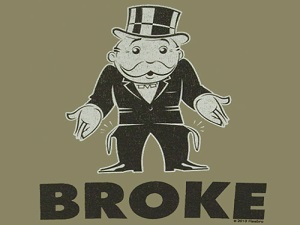 So you’ve made few trades and found your account is significantly lighter than when you started out. Don’t panic! Trying to make a quick buck with a high level of risk is called gambling, and gambling could well get you broke. Avoid!

Why High Risk Trades Could Get you Broke?

So you’ve made few trades and found your account is significantly lighter than when you started out. Don’t panic! You have plenty of company, because this can happen to everyone, even if you have a very good strategy. Most importantly, this has a pretty simple and easy fix.

How High Risk Trades Could get you Broke

OK, I wasn’t looking over your shoulder while you’re trading, but I bet you took a few very large trades and had your margin maxed out. That’s rather common, especially with beginners. You think you know where the market is going, and you think that the more money you put into a position, the more you’re going to make. That’s solid logic… but do you really know where the market is going? No, my friend, you don’t know (at least not always). Sure you might get it right a few times, but the thing is, no strategy is perfect, and there will always be times when the market doesn’t go in your direction. Sometimes you can get a series of these “wrong trades” in a row, and they can really mess up your trading account. It’s possible to have four, five -even ten or fifteen trades in a row that don’t work out, depending on market conditions and the frequency of your trading. Well, if you have 10-15 wrong trades in a row, I’d say it’s time to change something about your strategy or your risk management. And speaking of risk, let’s see what you you can do about it.

This might sound a bit counter intuitive at first, but you actually make more money by taking on smaller positions. How come? Well, if you trade long enough, statistically speaking you will eventually have a series of trades that go against you. It’s math, and not worth arguing against. If you invest a large percentage of your account, then it’s much more likely that you will come across a bad streak that will wipe out your account. Let’s use an example. If you have $1,000 in your account, and you risk $500 per trade, you can make some good money if the trade goes your way. But if it doesn’t, your account is cut in half. If you have a series of only two “wrong trades”, your account is gone. Two “bad” trades in a row is a pretty common occurrence. Now, if you’d had invested $50 per trade instead, and you had “two” bad trades, you would still have $900 in your account and you could recover with your third (profitable) trade. That’s a little exaggerated, but it’s the principle that counts. Several studies have been done about how much a trader should risk on each trade. Traders who risk more than 3% make less money in the long run than those who invest between 2-3%.

Maybe 2-3% doesn’t seem like much to you, but the point is to make money over all. Trying to make a quick buck with a high level of risk is called gambling. Besides, you can make up the difference by taking more trades. If you gamble half of your account on a trade, then you can’t take on potentially profitable trades in other assets. And one more thing: when your account starts to grow, that small percentage will represent more money than when you started out (2% of $100 is $2, but 2% of $1000 is $20). The bottom line is that if you find your account being depleted really fast, you probably want to consider making smaller trades. Try to keep the amount you risk on each trade within the butter zone of 2-3%, and then if you have a good strategy, you can make steady money.